When his wife’s teenage daughter comes to live with them at the start of a college course, a stepfather finds that the nineteen year old girl is a bit of a tease. She flaunts herself at him when her mother isn’t around until he decides he has to have her. When he goes into her bedroom one evening when his wife is out, the girl puts her panties on and a show for him and it leads to a sex session where she finds out just how much her stepfather loves his new daughter.

Bradley got up from the desk he was working at and walked across to the bedroom window just as the eighteen year old girl was getting out of the taxi. The short skirt put a lot of naked thigh on show and she came close to flashing her panties as she dropped her feet to the sidewalk and stood. Even when the skirt slid back into place it didn’t appear to cover a lot and the t-shirt seemed equally small, with a lot of bare midriff on show. Bradley stood appraising his stepdaughter and was amazed at the long blonde curls, prettily made up face and lithe figure. He hadn’t seen her in a couple of years, since the day he’d married her mother in fact, because she took the decision to go and live with her natural father on the other side of the country. The girl he remembered from his wedding day wasn’t the one getting out of the taxi and she certainly seemed to have grown up a lot in a couple of years. Bradley finally stepped away from the window and made his way down the stairs to where his wife was waiting at the front door. He watched as she hugged her daughter and then smiled as the girl came up to him.

“It’s nice to see you Tanya,” he said and suddenly found himself hugged in a tight embrace. The feel of the lithe body pressed against his own was a pleasant surprise and he was acutely aware of the breasts pushing against his torso and his crotch pushing against her midriff. It brought on a flash of excitement in his mind and it took some will power to keep his cock under control. Bradley pulled back feeling a little guilty, but Tanya just grinned at him as she grabbed her mother’s arm and stepped into the home. He went to pick up her bags and carried them inside. When he stepped in the lounge his wife and stepdaughter were sitting on the sofa enjoying a chat. He moved to an armchair opposite and as soon as he sat down realized that he could see up the teen girl’s short skirt to her panties. He tried to keep his eyes off the pretty sight of the white cotton, but couldn’t stop the occasional glance. Again his guilt flared up, but there was no denying that Tanya was cute.

“So you don’t mind me being here Bradley?” the teen girl suddenly asked.

He quickly brought his gaze up, but was unsure of whether his stepdaughter saw him trying to catch a glimpse of her panties. “Of course not,” he replied quickly. “Are you looking forward to starting your new course?”

“Oh yeah,” she answered. “It’s a great college and how lucky am I that you live so close to it.”

You may also like this story: Brother’s Sex Slave (Incest Sex)

“Well, we are happy to have you here,” he said. The teen girl resumed talking to her mother and Bradley again couldn’t help glancing down. When he did Tanya shifted in the seat as if she was making herself comfortable. Her legs parted wider and put her panties completely on show. Bradley looked up quickly and his stepdaughter shot a grin in his direction. He pretended not to notice, but it put the thought in his mind that she was a tease that enjoyed flashing. He decided it was time to go and stood. “I’ll get back to my work and leave you two to catch up.”

“Sure,” he said then smiled at Tanya. “I’ll take your bags upstairs to your bedroom. I’m sure your mother will show you the way to it.”

“No, I’ll come up now so that I can shower and get changed,” she said. “It was a long journey.”

Bradley suddenly felt a little nervous, but tried not to let it show. He stepped out of the lounge and picked up the bags. When Tanya followed him he led her up the stairs to the bedroom, expecting his wife to come as well. She disappeared into the kitchen though and he was left alone with the teen girl. “It’s this way,” he said and took her along to a room. His hands were full so he waited until Tanya opened the door and walked in then followed her.

“This is nice,” she said as she looked around.

Bradley walked across the bedroom and dropped the bags on the floor beside the wardrobe. When he turned back the teenage girl was already pulling the t-shirt over her head.

“What are you doing,” he hissed and his nervousness increased.

“I told you, I’m going to take a shower,” Tanya answered with a grin.

“OK, well I better go then,” Bradley went on.

“No rush,” his stepdaughter replied cheekily. “I thought that seeing as you couldn’t keep your eyes from my panties in the lounge you would want to see my bra as well.”

Bradley just stared. “I should go,” he repeated and moved across to the door.

You may also like this story: Life’s a Bitch, Then You Die: A Love Story

The teen girl giggled and he looked back to see her unhooking her bra and letting it slide down. He quickly turned and left before the naked breasts were fully exposed, but could feel his pulse racing. His cock was coming to life, but he tried to suppress it and the guilt kicked in again as dirty thoughts about his stepdaughter came to mind.

Bradley’s first experience of being teased by his cute stepdaughter was only the start and she seemed to take delight in being a flirt when her mother wasn’t looking. In the few weeks following her arrival he became used to seeing her panties, but he made sure not to be left alone in the house with her so that teasing was all that could take place. His fantasies began growing though and when Tanya started to make it clear that more than just looking was on offer it became difficult to resist. When she sat on his lap one evening there was no way he could stop his erection growing and the teen girl giggled quietly and wriggled around on it. “I think step-daddy likes his little daughter,” she said with a grin, but the sound of her mother coming down the stairs made her quickly get up and leave the lounge. Bradley tried to calm himself before his wife arrived, but he knew he was moving closer to sex with a teen girl. A couple of days later things finally came to a head when his wife went to an evening lecture after work. He got home to a quiet house, but when he heard movement from upstairs knew that his stepdaughter was in. His mind filled with thoughts of fucking her and the temptation was too great. He felt his pulse racing as he made his way up the stairs and moved along the hallway until he was standing in front of his stepdaughter’s bedroom. Taking a deep breath he knocked and walked in.

1 day FREE trial, with full access to all stories! 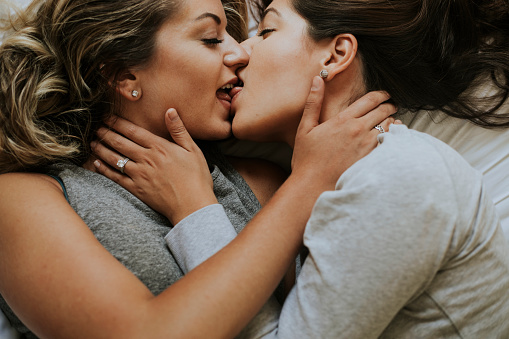 Problems with My Little Sister (Incest/Family)